After 14 months of labour the monumental library, architectural masterpiece of Michelozzo, was reopened on 20 February. It was built for Cosimo the Elder of the Medici as a “public library”, and was therefore intended not only to be used by the friars of the monastery but by all scholars, including laity. Regarded by visitors to the museum as one its most loved spaces, it houses an extraordinary collection of illuminated manuscripts from the 15th Century, some of which were illustrated by Fra Angelico and his collaborators. The works to be restored not only included the pavement and plant, but also the re-opening of the ancient windows and an improved showing of two panels by the studio of Angelico. 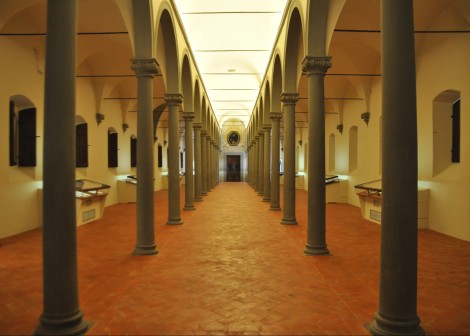 The project, brought about on a budget of 150,000 euros, allowed for the replacement of flooring, dating back to 1955, which had already been compromised in several places. It was repaired with new tiles which were handmade and fired using traditional techniques in wood ovens. The design of the new flooring was born from the philological study of contemporary libraries, such as the “Malatesta” of Cesena, and through observing the floor of the dormitory of San Marco. Here the continuous “herringbone” pattern of Tuscan “cotto” tiles is interrupted at some strategic points (such as at the entrance of the Library) by a square outline of tiles. With the restoration, the same square pattern was reproduced in the Library, with tiles marking out the bays and surrounding the columns.

In addition to the reconstruction of the pavement, the work also focused on the plant (heating and air conditioning, fire detection and electrical equipment). Of significance, furthermore, is the reopening of the Fifteenth Century windows on the left side of the hall, which up to now were bricked up. This allows for the recovery of the original lighting of the Library, with natural light, while still being screened by shades. The light, whether it shines in from the east or the west, is concentrated in the aisles (where desks with their books once were and which today is where display cases stand containing illuminated books), leaving a delicate twilight suffusing the central corridor.

To this then are added two new showcases which allow you to see two panels up close, both erudite and fascinating, which were painted by Zanobi Strozzi, illuminator, painter and assistant of Fra Angelico: the School of St. Thomas Aquinas and the School of Blessed Albert the Great. Finally, at the back of the Library, as well as two educational showcases on the art of miniatures, a touchscreen has been made available that lets you browse the pages of illuminated manuscripts of the museum, with pictures painted by Fra Angelico and his workshop.